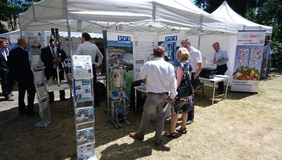 Glorious sunny weather for a special open-air occasion in Berlin: On 7 June 2018 the German Federal Ministry of Economic Affairs held the 25th «Mittelstand» Innovation Day (Mittelstand is a German term which generally refers to mid-sized companies) and at the same time celebrated the tenth anniversary of the founding of the Central Innovation Programme «Mittelstand» [Zentrales Innovationsprogramm Mittelstand (ZIM)], undoubtedly one of the most successful funding instruments for practice-related research and development in Germany. Over 300 exhibitors showcased their latest technological developments, products, and processes in the extensive park-like grounds of AiF Projekt GmbH in Berlin-Pankow. PFI was again among the exhibitors with its own stand and presented current results of an ongoing research project concerning biomass utilisation.

Small and medium-sized companies as well as numerous researchers from all over the Federal Republic exhibited a wide range of technological advances at the «Mittelstand» Innovation Day. Over 300 exhibitors from science and industry and almost 2000 guests from Germany and abroad underscored the special significance of the event for research funding in Germany. Alongside high-ranking representatives of business and research, prominent visitors included the Federal Minister of Economic Affairs Peter Altmeier, Parliamentary State Secretary Christian Hirte, and AiF President Prof. Dr.-Ing. Sebastien Bauer, who was newly elected to that post in January 2018.

The vast majority on the innovations presented owe their very existence to project funding by the ZIM programme, now in its tenth year. In addition, numerous other innovations arising from other research programmes funded by the Ministry of Economic Affairs were also presented. These include Industrial Collective Research (IGF), whose project sponsor is the German Federation of Industrial Research Associations (AiF), and Research Funding for Innovation Competence (INNO-KOM) with the sponsor EuroNorm GmbH.

PFI Biotechnology presented a novel approach to fermentation-based production of biobutanol from residual materials from the food industry. The research project known as «Waste4Butanol&Biogas» funded by the INNO-KOM Programme is concerned with a combined material and energetic utilisation of waste materials from food production. The primary goal of the project, which has been running since October 2017, is to develop fermentation technology for the production of bio-based solvents and fuels from rejects occurring in baked-goods and deep-frozen pizza production.

Apart from the highly innovative fermentation process for increasing yield and productivity, the combined energetic utilisation of fermentation residues is an additional special feature of the project. Use of the energy-rich fermentation residues for biogas production yields thermal and electrical energy for biomass treatment. The goal is to make the overall process energetically self-sufficient. The principles of the approach are clearly demonstrated with the aid of charts and samples of substrate and product as well as a laboratory-scale trickle-flow reactor specially set up on the stand.

Dr. Stefan Dröge and Dr. Thomas Fiehn from PFI’s Biotechnology Department explained the advantages and potential of the novel process for combined material and energetic utilisation of residual and waste materials to numerous interested persons. Numerous conversations and discussions also yielded some interesting ideas for joint research and industrial cooperation. For PFI the annual Innovation Day event thus offers an extremely attractive opportunity to present its research activities to a broad specialist audience and at the same time to establish contacts with potential cooperation partners.