The project’s activities are possible thanks to financial support from the European Regional Development Fund provided by the Interreg North-West Europe Programme. 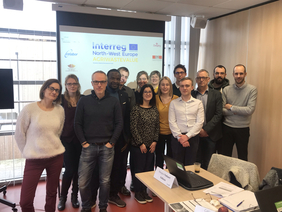 Background of the project

Despite a difficult economical context these last years in Europe, some sectors like the cosmetic and nutraceutical field are significantly growing. While the European cosmetic sector is estimated at 72 billion €, the nutraceutical sector is also a growing sector as consumers are more concerned about health, population aging and the positive image of natural products. The European food supplement market is expected to increase to 10.3 billion € by 2020. These sectors are characterized by a strong demand from consumers to return to natural products from local resources.

Currently, the majority of natural actives used in cosmetic or nutraceutical formulations are imported to Europe, while a great diversity of resources is present in the North-West Regions, especially crossborder regions such as France, Germany, Belgium, Luxemburg, Niederlande, Irland and the United Kingdom. A large amount of residues in covered areas known for their arboriculture and viticulture sectors are not fully exploited for the sourcing of natural actives and are not used.

The aim of the AgriWasteValue project is to transform agricultural residues from the European North-West regions into bioactive compounds in order to use them in key industrial sectors such as the cosmetic and nutraceutical fields and then in a second phase in the energy, chemical and agricultural fields.